What We Do » Discernment Counselling

Only One of Us Wants to Keep Working on the Relationship.

What Should I Do?

Are you in a relationship where you really want to make it work, but your partner isn’t so sure?

Maybe you’re eager to start couples therapy but your partner doesn’t know if they want to work on the relationship or even stay together. That can be very hard to hear. It can leave many people feeling hopeless, helpless and full of despair. How can you move forward if your partner isn’t sure they want to?

If this describes your situation, Discernment Counselling could be a great fit for you.

Discernment counselling is intended for couples in which one person is not sure he or she wants to work on the relationship or even stay together, and the other person wants to solve the problems to make a marriage better. This is what couples therapists refer to as a “mixed-agenda couple.” The techniques for working with these kinds of couples are different than in regular couples therapy.

How does Discernment Counselling work?

The goal of Discernment Counselling is not to solve your problems but to figure out whether you might be able to solve them. It is short-term. It involves a limited number of sessions (between 1 and 5) to see whether the two of you can get together on a particular direction. The end goal of Discernment Counselling is to make a decision to follow one of three potential paths that are in front of you as a couple. They look like this:

Do we have to do all 5 sessions?

Not at all. You only commit to attending one session at a time. At the end of each session, the therapist will check in with each partner, asking them if they want to continue to another session and/or if they have made a decision regarding a Path.

In Discernment Counselling, the therapist has particular strategies for working with each partner in a way that helps each of them feel supported without feeling pressured, either by their partner or by the therapist. That being said, since it always takes two to tango, the therapist will encourage each person to be accountable for their own contributions to the problems in the relationship. 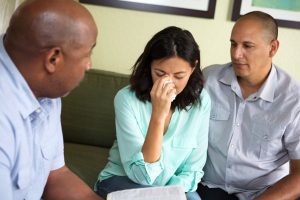 Do I do this together with my partner or separately?

Another good question. The answer is both. In each session, you will meet as a couple with the counsellor as well as having some dedicated one-on-one work with the counsellor. One person will leave the room while the other stays and then they will switch places. After each one-on-one portion of the session, each partner will summarize what he or she is taking with them and share it with their partner.

Discernment Counselling is designed to include both people so the therapist gets to hear both viewpoints. Studies have found that if only one member of the couple speaks to a therapist about their relationship, the relationship is more likely to end. That’s because only one side of the story is getting told (and it’s usually a pretty negative one).

How long are the sessions?

Typically, sessions are an hour and a half each.

How does it work if I want to work on things and my partner isn’t sure they do? Good question. This is actually a pretty standard scenario and exactly why Discernment Counselling was developed. We call the partner who wants to work on things the Leaning In partner. The one who isn’t so sure is called the Leaning Out partner.

So is Discernment Counselling couples therapy?

No, it’s not. Think of it as “pre” couples therapy. At this stage the goal is not to improve the relationship, it’s about clarity of next steps. Discernment Counselling won’t solve relationship problems. There’s no homework, teaching of skills or activities to deepen connection. You shouldn’t even expect the relationship to change during this time.

However, what you can expect is greater clarity and confidence in your decision making about the future of your marriage, based on a deeper understanding of what’s happened to the marriage and each person’s contributions to the problems.

What if we’re already in couples therapy? Can we switch to Discernment Counselling?

Absolutely. Discernment Counselling can provide a timeout to re-evaluate the goals of the therapy and see if you and your partner are still on the same page.

I’m kind of scared of what might happen if we do Discernment Counselling.

That makes a lot of sense. You’ve invested so much time and energy into this relationship. What if you find out it truly is over? That is one of the most devastating things a person has to face in life.

The thing is, at least if you try Discernment Counselling you’ll know that you’ve given it your very best shot. You’ll also have a very clear sense of where your partner stands. Ultimately this will probably feel better than the current uncertainty and lack of direction you’re stuck in.

The great family therapist Carl Whitaker said this: “People marry each other for profoundly important reasons, and no one should divorce until they deal with those things that caused them to marry and then want to divorce each other.”

It’s worth it to figure out if you can still make it work.

Studies have found that up to 50% of people who are get divorced later wish they had tried harder to avoid divorce. Another study found that in 75% of couples, at least one partner had regrets about divorce one year after it happened. See our earlier blog post for some sobering statistics about divorce.

That’s great. I’m pretty confident in saying you won’t regret it. To get started, you’ll need to share this page with your partner. Find out if he or she is willing to try Discernment Counselling. If so, call our friendly receptionist at 604-539-5277.

I have some other questions about Discernment Counselling.