How To Repair Unintentional Hurts In Relationships
Written by: Darren Wilk 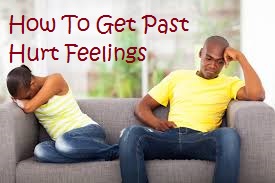 Hurt feelings don’t always mean your partner did something wrong.

Something that can derail us in conversations with our partner is feeling hurt by an incident in the relationship.  I was recently visiting with a friend and she shared a story about a blowout fight she had with her husband. Being a therapist, I’ve grown used to this over the years.

The wife was sharing a story about how she had hurt her neck and because her range of motion was very limited, for her to turn her head caused pain and spasms in her spine.  They had been driving on the freeway and as he was trying to make a last-minute lane change he asked her to check the lanes beside her because it was easier than for him to try to see for himself.

She said she felt hurt and disregarded because his lack of planning ahead required him to increase her discomfort.  “If the roles were reversed I would have been in the right lane way ahead of time so that I didn’t cause him pain.  I was so mad at him”.

The past isn’t dead. It isn’t even the past - Obama quoting William Faulkner

What’s wrong with her complaint?  Not a thing, but what she isn’t telling you is her history with this issue of feeling like her needs didn’t matter, like she was less important than others.  In her family of origin, she was the youngest in a large family that struggled financially.  Decisions were always made based on what was best for the larger unit, and her needs were not able to take center stage because the bigger picture was, at times, quite dire.  So, she is sensitive to situations where her needs are not acknowledged.

How to know if you matter.

So what was key for her here?  She felt like he didn’t listen to her, like her needs didn’t matter enough for him to keep track of the information.  Drs John and Julie Gottman talk about the importance of a good love map, of knowing about your partner’s inner world.  She felt that if she mattered to him he would have kept that information about her sore back in his mind and made driving decisions to accommodate that.  This idea of feeling like you matter is also one of the bedrocks of trust.

What is a trigger?

But here’s the kicker.  Of course she would have… this is a trigger for her.  Triggers are normal, enduring vulnerabilities from moments in our past that escalate interactions today. These are normal cause they are in all of us and the impact can be reduced, but rarely eliminated.  For example, she is sensitive to being ignored, therefore is sensitive to others feeling ignored or disregarded by her and she would have modified her behavior accordingly.  This doesn’t make her a better person than he is and it is unfair to compare him to herself and find herself superior.

Does that mean that her partner did something wrong?  Nope.  Is she just being over sensitive?  Nope.  That is just not his button, so it didn’t occur to him that this could be an issue.

In his world, he grew up in a hardworking Portuguese family where people worked through their pain and didn’t complain.  His parents were loving people who worked together as a family to make sure everyone got what they wanted and needed.  His parents coached his sports teams, drove him to hockey at any ungodly hour of the morning, knew the names and phone numbers of all his friends and taught him that he could be whatever he aspired to be.  They also yelled a lot and were very skilled at demanding what they wanted or needed.  So because she had not clearly stated that being upright in a moving vehicle was causing lots of pain for her and that she really needed him to bubble wrap her in love, it didn’t occur to him that he was asking too much.

Why is it important to keep our partner’s sensitivities in mind?  The Hurt VS Harmed debate:

Why is this an important conversation for the couple to have?  Because we can easily forget that just because someone’s feelings get hurt doesn’t automatically mean their partner did something wrong.  It just means your feelings got hurt.  The interaction itself was neutral.  It was how they managed it that mattered.  In a perfect world, he would have been more careful about his driving.  In a perfect world, she would have been clear at the beginning of the drive that she was in pain and he needed to be proactive to maximize her comfort.   But these things didn’t happen so her feelings got hurt, then she got contemptuous towards him, and then his feelings got hurt.

Even the best couples have regrettable incidents.  “Don’t worry about it, Its Normal.”

This is not actually an argument; it is a regrettable incident.  At the Art and Science of Love Couples workshops and in session we teach couples how to repair after an interaction like this.   If you can easily list examples like this from your own relationship it doesn’t mean you are doomed, it just means you need to get better at repairing after a regrettable incident, because you will have them.  Master couples repair often and they repair well.  They remember their partner’s sensitivities and they walk carefully around them.  They remember that their partner is on their side, that they want good things in their big picture together and generally try to honor that.  You are not a Disaster Couple (verses a Master Couple) because you had a regrettable incident, but you might be or become one if you don’t repair.

Within Every regrettable incident is a conversation the couple still needs to have.  We call this a recovery conversation. - Julie Gottman

All it would have taken for this couple is for one of them to say, “I can see why your feelings got hurt.  That wasn’t my intention, but I am still sorry it happened.  You and your inner world matter to me”.  Repair often and repair well.

LaVerna Wilk, is a Certified Gottman Therapist and works for BestMarriages.ca Counselling Center, in Langley BC.  She is not only an expert counsellor, has raised 5 girls while getting her masters degree and loves to get dirty with her own jeep on off-roading adventures.  Bestmarriages.ca was established in 2000 to focus not only on couple’s therapy, but has also established successful couple’s retreats and training workshops across Canada.